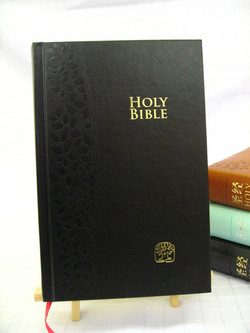 “A Great Match” can be applied to more than just the meet between Federer and Nadal, can you imagine?!  In fact, without any rival hint, we are using the phrase lovingly to describe the full complement between two bible translations – CNV(新譯本) and ESV.

When you consider a bible translation in any language, you would pay attention to issues like accuracy, readability and delicacy.  And in these realms, both the Chinese New Version (CNV [1992/2005] with an option of Simplified or Traditional Character) and English Standard Version (ESV [2000/2011]) have their proven merits.  Whose textual bases being highly reliable – in the legacies of BHS and UBS, whose translation philosophy being essentially literal – communicatively word-for-word while maintaining clarity of expression and literary aesthetics, and whose collective effort being phenomenal – with two publishing teams, each of which comprising over a hundred experts and scholars, etc., the CNV/ESV duo offers a choice rendering of God’s holy word to the population of two largest language groups in the world.

We heartily recommend this parallel bible because of the great complementarity between the two translations.  Read separately, each using its contemporary style will offer the reader a clear understanding of God’s word.  But read side by side, the two translations will bring out a multi-dimensional perspective much like the multi-faceted radiance given off by a precious diamond.  A concise example can be taken from 2 Cor 5:14, whereas the ESV rendering goes: “For the love of Christcontrols us,” (italics added) much in line with the KJV heritage using“constraineth,”the CNV has“原來基督的愛催逼著我們,” which means “urges” in English.  Taken together, the two versions encompass both ends of the Greek term συνέχει，which has an overtone of forceful“holding together, pressing together.”  Therefore, in application it matters that we as followers of Christ do the do-commands as well asthe don’t-commands.

You will find the exploration of God’s word through CNV/ESV well worth your while.  May our Lord Jesus Christ be glorified, the good news spread even more widely and His saints further edified because of this parallel publication.

This product hasn't received any reviews yet. Be the first to review this product!